Ever hear the expression “Don’t get mad get even.”. This is my response to the treatment a certain Spanish telecommunications service provider gives to their customers. Local regulatory commissions and the Spanish government turn a blind eye.

The Spanish consumer has to look to Brussels for help as they seem the only ones to stand up and recognize the problem. The European Union telecommunications regulatory commission recently slapped a certain Spanish company with a €500 million fine.

The piece involves the viewer placing on one of the gloves with the guilty company’s logo printed on it. The figure in the piece has his back to the viewer and his pants around his ankles. There is a hole where his anus is, there is a red glowing from within. The viewer, with the glove on, places his finger in the anus of the figure, four centimeters in there is a button which when pressed triggers a scream (there are four tracks).

This piece is a fairly direct representation of the treatment I feel the Spanish consumer gets from the local Telcomm giants. 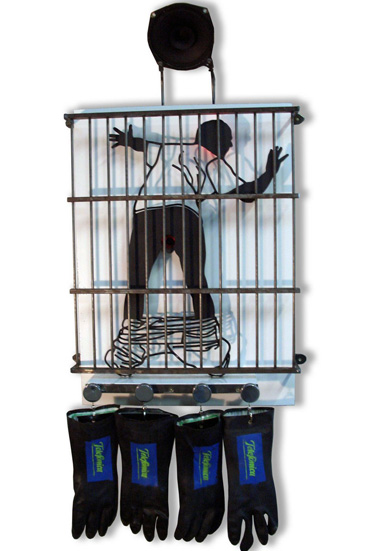